The big winners from the first HS2 procurement phase 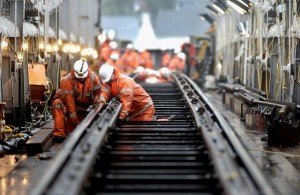 The winning contractors for the first phase of building works for the HS2 highspeed railway between London and Birmingham have been announced by the Government this week. Balfour Beatty, Kier and Carillion are the big winners, having secured deals to construct large tracts of the first building phase.

The contracts are expected to generate 16,000 jobs, with the construction projected to last until 2026.

Transport Secretary, Chris Grayling, confirmed that contracts have been issued with the aim of meeting this timescale, whilst playing down concerns raised by quantity surveyor Michael Byng that the cost of the project could almost double to £100bn.

Much of the construction of the railway will be fulfilled by joint ventures, with Balfour Beatty and VINCI securing a £2.5bn contract for both lots within the North Area, and Eiffage and Kier teaming up to deliver two of the lots within the Central Area to the tune of £1.2bn.

Additional work covering stations and railway systems will follow over the course of the next year.

The award will come as welcome news to Carillion, whose share price fell 70% last week, following a profit warning, and whose chief executive’s departure has just been announced. Following the release of the contract award, Carillion’s shares recovered by more than 15% within a few hours of the news.

Preparation is underway, with construction commencing in 2018 following the completion of the design phase.

Additionally, the phase 2 routes were confirmed in a government announcement on Monday, with phase 2a running from the West Midlands to Crewe, and phase 2b covering Birmingham to Leeds, and Crewe to Manchester. The design phase for this leg of the build is currently mobilising, with US firm CH2M leading a consortium consisting of Arup, AECOM/Capita/INECO and Mott MacDonald/WSP.

What does this mean for procurement and SMEs?

It has been estimated that the entire HS2 project will generate over 7,000 contracts, 60% of which will be awarded to SMEs. This is expected to support approximately 16,000 jobs, creating thousands of opportunities for SMEs to get a foot on the ladder, according to David Higgins, Chairman of HS2 Ltd.

There will, therefore, be opportunities to tender into the project over the coming years, both during the phase one construction works and following the conclusion of the phase two civils procurement exercise.

The message to SMEs is clear: if you are prepared, there will be plenty of opportunities to get on board the HS2 project.

A deep dive into the bid review process