Home / Blog / Writer On The Run / The Highland Fling 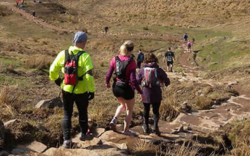 In April 2012 I joined a gym. It had been a long time since I had last ventured into one and it was with some trepidation that I signed up for a 12 month membership. The problem was that I really didn’t have a choice. My weight had ballooned and the combination of eating badly and working long hours meant that my fitness had dropped to very low levels.

To say that I enjoyed the gym would be an understatement. Yes, it was hard for the first month or so but once I managed to set up a routine I was often training twice a day. My weight dropped to my lowest adult weight and fitness levels soared. Exactly one year to the day after joining the gym I ran a marathon. I was hooked and have continued running and weight training ever since.

I have now run marathons across the world and have even competed in a stage race in the Himalayas. There have been ups and downs, however, and in 2014 I did not run very much due to injury and work commitments.

My running statistics are:

Towards the end of 2014 my injuries cleared up and I joined a new running club, as I had moved house. I made a conscious decision to “get back into running” and my first run in 2015 was the Blackhill Park Run on 1 January, where I set a new personal best (PB) for the course.

To date this year, I have run two marathons and three half marathons, and set PBs at park run, 5k and half marathon distance. I have also taken up trail running.

Many of the people I have met this year at the trail running club are ultra-runners. An ultra-run is any run over the marathon distance of 26.2 miles. Some of them run what I consider to be impossible distances of up to 150 miles and over. There is no way I would ever attempt those sort of distances but the test of an ultra-run does appeal, even if it is a little scary if you think about it too much.

After chatting to some of these guys and following their exploits via blogs and live tracking their events, I decided I should test myself and began to look around for a suitable challenge. I didn’t want a run that would take more than 12-15 hours as I did not really fancy running day and night, and I also thought that my first one should be testing but achievable. Another criteria was that it had to be a trail run. I had become very bored of running flat city marathons and even though trail runs are much harder, I felt that a trail run would provide more of a sense of achievement and be more enjoyable.

Race selection was much more problematic than I thought it would be as there are hundreds of ultras in the UK. Even narrowing them down by distance and trail left a lot to choose from. My final choice was the Highland Fling, a run of 53 miles over the first half of the West Highland Way through the Loch Lomond and the Trossachs National Park. It is a little longer and certainly much tougher than I would have liked for my first ever ultra-run, but the chance to run in such a beautiful place heavily influenced my decision. Plus, the start is only a couple of hours’ drive and as race day is 30 April, it allows me to train in the winter. I don’t run well in the summer heat and even a mild British summer can sap my energy very quickly.

So, that’s it, I have entered and will be spending the next six months of my life running up and down very muddy, very steep hills in preparation for the longest run of my life. I am not 100% sure I can do it; it is twice as far as I have ever run before, and with 7,500ft of elevation with some technical sections thrown in, is much tougher than anything I have ever attempted before.

My philosophy is this: If I don’t try, I will never know.

Neil is a MBA qualified management professional with many years of bid writing and managerial experience and is the founder of Executive Compass®.

Connect with Neil on LinkedIn

The bidding process in procurement